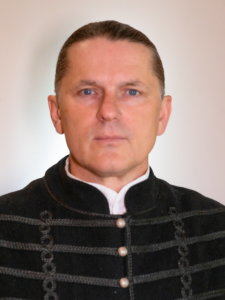 When I was a child, my favorite stories from my father were about his two years of experience as a soldier in the Yugoslavian army Cavalry. He was the last generation of “Partizan Huszar” in 1956. As a Hungarian, he and his unit were protecting the Yugoslav border with only 5 bullets against the invading Hun army.  However, the battle never happened.

Many-many years later, I had a dream and in it I was riding a stallion and shooting bows and arrows!  The very next day I called up the stables close by where I was in Pemberton BC, and before I knew it, I was riding for the first time in my life on Splash, Cowboy Bob’s Quarter horse stallion.

My horseback journey continued in 29 countries, on 518 horses. My greatest battle was in Hollywood.  On Spike (Spectrum in Europe) TV’s Deadliest Warrior show I was playing Attila the Hun, facing Alexander the Great, who according to history never lost a battle. But in Hollywood he did!

I started to compete in the Kassai system in 2003 by joining team Petrasko, Hungary, which was one of the four teams that established modern horseback archery in Hungary. In 2005 we successfully organized Canada’s first horseback archery competition.

In 2006 once all the requirements had been met, such as entrance exam, archery, riding, horseback archery exams, etc., I brought Kassai Horseback Archery to Canada. To this day, I encourage interest and participation in this system, which intrigued me because of the simplicity of the game, the complexity to perform it, and the almost endless chances to master it.

I am one of the founders and the president of the Canadian Federation of Mounted Archery.