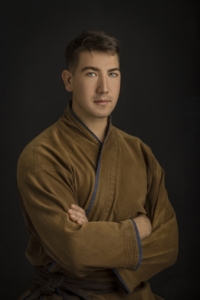 Master I. level student of the Kassai Equestrian Archery School

For me, equestrian archery started with a childhood adventure in 1999 in a summer camp. The camp program included riding and archery, usually as far as I could I avoided these activities. In my boredom, I climbed onto a horse I thought was the most pious with a bow and a few arrows, and after a long request, someone threw me a bag full of shavings into the middle of the riding arena. After the first few awkward shots, I found that the two “professions” merged are much more exciting than trying them separately. The success of my unique stunt, which would amaze the masses, was outlined, while the curved wooden incompletely feathered arrows stirred tiny clouds of dust around the bag. When my enthusiasm peaked and I gave it voice, the camp leader and the older camp-assisting riders told me that equestrian archery was a thing already. A person named Kassai Lajos revived this ancient martial art, starting by reconstructing the bow of our ancestors in the 80s and then firing shots from horseback with the bow he made. That was the call for me. The events of that day set in motion the “program” that made me – I think – who I am now. But I was 8 at the time, so for a few more years, equestrian archery was just a favorite game of summer riding camps.

In my teens, studies and sport defined my life. I went to primary school and music school in Cegléd, and under the hands of Károly Czigány I played water polo with such companions as Dóra Czigány, Dávid Jansik and Szilárd Jansik. Our coach not only taught us the ins and outs of sport, but he also shoved us discipline, dignity and humanity, for which I am infinitely grateful to him to this day. I went to the city library to study, there was peace and quiet, and the students could use the computers at the facility. Sticking to the screen with my mouth open, I spent a few minutes watching Kassai Lajos’ online videos every time. I listened to the Master, tried to spell out a movement, which I then tried in summer camp. For a long time, this meant horse archery for me, until in 2005 my parents decided to move between the hills of Zselic, less than 10 kilometers from the Kassai-valley.

It was a turning point which ended music and sports and opened the doors to a hitherto unknown world that existed only in my dreams.

In 2006 I took part in my first training in the Kassai-valley, then my studies took me far from Kaposmérő, so that after a break I could be under the hands of the Master again. In meantime, I realized that I needed to improve my riding technique, and accordingly, I trained. I also had to eliminate a lot of bad habits in archery in the beginning.

Thanks to Kassai Lajos, I was able to go abroad, from China to the United States, for training camps, competitions and demonstrations. These occasions have been lifelong experiences for me. A dream came true when following the instructions of the Master I was able to thrive in body, soul, and spirit and I achieved the Master I. degree in 2018, although I think for someone to be truly a master, they need to have gray hairs, as sporting performance means tiny in itself, without life experience and wisdom. My wife, Anna, and I live in the heart of the Kiskunság on a 12-hectare estate that is home to both the animals living here and equestrian archery. Our everyday life is interwoven with what we have learned from the Master, and since Anna is also an equestrian archer, this martial art is a corner stone of our life together.

As a member of the International Instructors of the Kassai Equestrian Archery School, I consider equestrian archery to be an unparalleled opportunity to get to know ourselves deeper through its martial art aspect, and I think its relevance to our cultural roots is unquestionable.