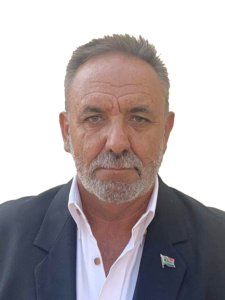 I started horse riding in South Africa as a young child and was always fascinated about weaponry on horseback .
Since 2007 I started doing Tentpegging as a form of Martial Art and was exposed to shooting from Horseback with Handguns, Lance and Swords. During this time I was introduced to the Millitary Discipline and Parades which appeal to me and was very much part of me due to my background as a Officer in the South African Military Operations in the Angolan Bush War during the ‘80s.
In 2008 I read an article about Horseback Archery and was was shooting my first horse bow in 2009. As a result of this I met with Daniel Griffen in 2013, after this I was the co founder of the first Mounted Archery Club in South Africa club in 2014 which lead to Maasa (Mounted Archery Association South Africa ) 2015. In 2014 Daniel Griffen did a clinic in Pretoria and from there the sport grew fast in South Africa .
In 2017 I competed first time internationally in Turkey and then visited Iran, Texas, France, Korea, Hungary, Khazakstan.
2016 I  attended Kassai cup in Bredasdorp and met master Kassai for the first time, which made a huge impression on me. Then in 2019 I was able to visit Kassai Valley  and was drawn to the system.  I met masters of the sport and noted their humbleness and servant attitude toward the sport. I was invited to Nemeth Atilla tribe and felt as if I am part of something special.
I invited master Kassai to South Africa and as a result my Track was approved and I received my International Judge certificate in 2020.
I believe this system is the way forward for International Horsearchery and hope that I can do my part. The Kassai  system enable me to live the real important principles in life: Respect, Honour, Humbleness, Servanthood, Honesty, Structure, Focus, Art, Military Discipline, “Kyuba No Michi “ The way of the Bow and Horse.