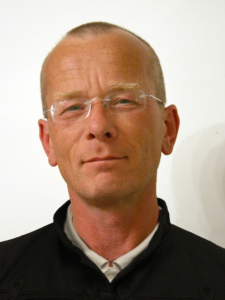 My first time in the valley about 20 years ago was a Saturday afternoon in autumn. Lajos and his students were training. They were cantering up the hill and shooting at targets. When Lajos recognized me – we had met before in Summer in Fort Dodge, Iowa – he did not say hello. He shouted: “Do you want to sit on a horse?” So I hung up my coat on an apple tree nearby, one of his students gave me her horse, her bow and her arrows and I joined the training. Cantering uphill and trying to shoot, trotting downhill and struggling not to fall off the horse. Afterwards we were sitting in the yurt discussing the training. That is, I was just listening and not unterstanding anything they said.

It took me some weeks to get over the pain in my lower back, but I immediately knew not what I wanted but what I needed to do: As with all spiritual paths there are only two rules: 1. start and 2. continue.

I had gathered experience in the martial arts before and I already had become something I never had intended to:  a teacher. So it was quite natural that after only a few years of going to the valley as often as I could I started to offer the little knowledge I had to other people. So the Austrian Kassai School started.

Why horsearchery and why the Kassai School? Anyone who has experienced a quality training in horsearchery knows why it is truly called the “queen of martial arts”. Like all martial arts the task is to develop things you already posess, get rid of the unnecessary garbage which society laid upon your shoulders and become again what you once were: natural.  The horse adds strength, speed and partnership, the bow adds effectiveness and accuracy. Thus the trinity of horse, bow and human forms the utmost incorporation of graceful strength and powerful elegance.

Horsearchery is the queen of martial arts and the Kassai competition is the queen´s crown. All other horsearchery competitions derive from the Kassai competition. It is the most challenging and the most rewarding competition: the distance to the target, the number of arrows you shoot, the directions you shoot and the speed of the horse – all these things change while you walk the path. And the Kassai system in its examination aspect always accompanies you and tells you what to do next. And it tells the beginners how to set the next step.

To the spectator the horsearcher appears as a lonely warrior. In fact, horsearchery is a team sport: there has to be someone who collects your arrows, who counts the points, who clears the track,… Who can do that perfectly? Only Horsearchers! The same teamwork is needed in training and preparation matters. Thus the Kassai tribes are way more than sports unions, they are families, where each member takes responsibility for the needs and concerns of his or her comrades.