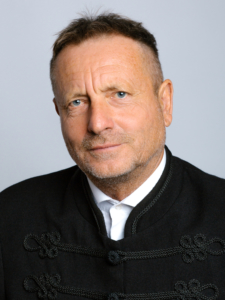 Kassai Lajos is the founder of the modern equestrian archery.

“As a child I had a wide range of interests, but a constantly recurring activity of mine was making bows. Upon becoming an adult, this activity turned into a hobby, and I started to take part in archery competitions with my self-produced bows. I won nearly all the competitions I showed up for and this lead to a strong interest for my bows within the competitors’ circle. After overcoming many obstacles and failures, by the mid-1980s I started my own company to manufacture and market the bows that I designed and developed. This was a turning point in my life because I could make a living out of the activity I had enjoyed the most since my childhood. I made use of modern materials to replicate the bows of the Hungarian ancestors, and with such a bow in hand I jumped on a horse. I had no experience in horsemanship and consequently almost fell off the borrowed horse, but I managed to draw the bowstring and fire my first shot. This feeling was precisely what I had been seeking all my life, so when I finally experienced it, I couldn’t help but do it over and over again. My goal was to revive the lost knowledge of my Hungarian ancestors. I practiced relentlessly every single day and I always imagined myself fighting in a battle. Through my consistent practice the outlines of a new sport began to unfold, and through the tutoring of all those who gathered around me, an education system for equestrian archery was established. The first competition based on the Original Kassai System was organized in 1994. Throughout the years, the system has garnered a considerable following and has been growing steadily not only in Europe but in many countries around the world. In 2011, the education and competition system that I developed made its way to an accredited public university course and became part of the equestrian disciplines. In 2012, the Hungarian Government recognised it officially by inducting it into the Hungarian Cultural Heritage, and in 2013 it received the highest state honour by being officially declared a Hungaricum. In 2019, the Original Kassai System was registered with the United States Patent and Trademark Office and obtained full legal protection. In 2020, with the full cooperation and mutual support of the international judges, the World Federation of Equestrian Archery was established with headquarters in Lausanne, Switzerland. This international organization with its high level of professionalism in equestrian archery, sportsmanship and organizational structure is ready to accomplish the task of having the world and the officials accept equestrian archery as an Olympic sport. I have more than three decades of research and development work behind me, I have travelled throughout the world with my well-choreographed equestrian archery presentations, and I have conducted a large number of training camps in a broad variety of countries, ranging from the USA to China, many European countries, Russia, the Middle East and Malaysia. By teaching equestrian archery over the last 30 years I have witnessed all the mistakes and blunders one can encounter, but I have seen few that I would not have committed myself, and therefore I am absolutely aware of how much effort it takes to correct them. Consequently, as the founding president of the World Federation of Equestrian Archery, I consider it my primary objective to provide a clear and clean path ahead in equestrian archery to all those who join us.”