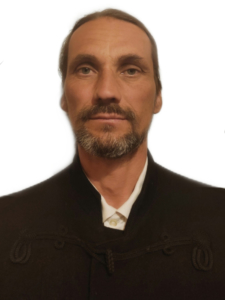 I have been involved in the preservation of equestrian traditions since the early 1990s. In 1996 I bought my first Kassai bow and then became a member of the Csallóközi equestrian archers team. This team naturalized the equestrian archery of Kassai style in the Highlands and organized the first competitions. I organized my own team in 2004 and then became a chief of tribe. We have been organizing competitions for 16 years as well as taking part in the 10th century battle scenes where we show the equestrian archery fighting style. Being a member of the Kassai Equestrian Archery School is self-evident to me. I have been active in it for over twenty years, I have been able to follow its development. This system is now mature in all areas, in training and in the system of competition, just as in its organization and hierarchy. It raises warriors. I think it is unique in the world. It makes a reality the idea that it is not the ancestors that must be followed, but what the ancestors followed!