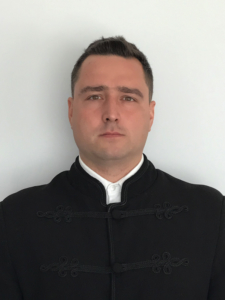 I was 14 years old in 2000, when I have started riding horseback. Kovács Ferenc and Tokaji Sándor, participants of the Magna Hungaria Expedition were those who brought horses and equestrian archery into my life. I have been fascinated by history, therefore it catched me easily, when I saw them shooting from horseback.
My first compatition was at Kisújszállás with my own horse in 2002, and I became member the Horváth kánság. Me and my friend Czuczi Antal were practicing with great enthusiasm. We have made our own track in Kunszentmárton, and started to teach those who was intrested.
In 2013 by the cessation of the Horváth kánság I could choose, in which path would I like to „ride”. I decided it will be the Kassai Equestrianarchery School. I became a törzsfő, and a leader by the support of my team, and I’ve could established my tribe.
The rule and examination system of the Kassai School is perspicuous, clear, and objective which is very important. The education system very efficient, because it was developed in the past 30 years.
I have found in it, what is missing nowdays. Through the personal  guide teach me order, discipline, and endurance, while it makes community from different persons, who hold together bye the same values. It was clear for me, I would like to live like that. It is more than keeping traditions, because it doesn’t stop by the appearance, the „shell”. The Kassai System merges the professional sport, the military traditions, the hobby at the same time, while the original objectives are not changing.
Equestrian archery is a tool of how to become valuable people. If I would be japanese, I would say it is the bushido. As a hungarian I say: it is Kassai Equestrian Archery!
I am extremly lucky, that I could know, and learn from Kassai Lajos personally, and I could give further these values. I have the oppurtunity, to dip my jug from the cristal-clear spring. Probably after many years from this water somebody will make tea, somebody will mix it with syrup.
Our common task is: keep this water cristal-clear as long as it possible!