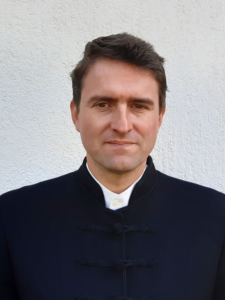 I have been fascinated by horses since childhood and as I got a bow in my hand on horseback about 30 years ago, I got the whole picture. I participated in many horsearchery shows and competitions, when slowly, moving on many bypass roads I arrived to the Kassai Horsearchery School. I competed on an official track first time in 2004. Getting to know the Kassai system I began to practice. More and more people joined me in my training. After a while for the request of the evolved team, I stepped on the path to become a törzsfő. I was elected to be a leader in the school in 2008.

At the beginning I choose the Kassai system, because I was convinced that this is the place where horsearchery can be learnt on the highest level as well as the founder and leader of the school, Kassai Lajos, deserves the highest respect in horseachery. My opinion has not changed since, moreover I look at Kassai Lajos as my master. During the years our friendship developed intencly, so my honour to him became unshakeable. I believe that the leadership of horsearchery is in safe hands. I stand proudly next to him and I am happy to support the school in everything I can, but not only for our master and my fellows, but also for my homeland, because an ancient hungarian martial art was reborn. I believe that developing the Kassai system was revolutionary, and it works well in every detail. Members can be only enrichened both professionally and personally in a school based on several decades of experience. Quality is the flagship of the school and hard work is needed for gaining success. Our main aim is to train the world’s best in horsearchery. It is an honour and uplifting feeling to fight on this level in our community.